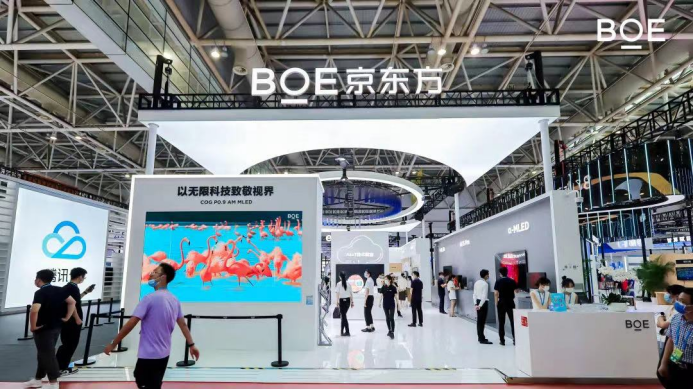 The company has established 16 automatic and intelligent semiconductor display production lines across the country, which can automatically collect terminal data in industrial production and form intelligent data analysis models.

BOE’s factory in Fuzhou of southeastern China’s Fujian Province, which mainly produces high-end and super-large display panels, has been included in the World Economic Forum's Global Lighthouse Network. BOE is the first and only display company from the Chinese mainland.

Global Lighthouse Network is a community consisting of world-leading manufacturers that use Fourth Industrial Revolution technologies, such as artificial intelligence, cloud computing and big data to enable growth.

Liu Wenrui, vice-president of BOE and general manager of the factory, said they had adopted digital technologies and advanced analytics in a fully automated production system, with production costs reduced by 34% and output up 33%.

Based on rich experience in intelligent manufacturing capacities, BOE has established an industrial internet platform, which provides digital transformation services for 200 companies across the nation and helps them improve productivity by about 30%, Si said.

China Daily said that the platform is expected to enhance the intelligent manufacturing and digitalization level along the upstream and downstream segments of industrial chains.

Statistics from the Ministry of Industry and Information Technology showed China had cultivated 150 large-scale industrial internet platforms, with more than 78 million units of industrial equipment connected to the platforms.

“The industrial internet has become a new engine driving the growth of the digital economy and has showcased remarkable development potential,” said Liu Xiangdong, a researcher at the China Center for International Economic Exchanges.

BOE topped the domestic market with flexible OLED panel shipments of about 60 million units in 2021, up nearly 60% year-on-year, making it the world's second-largest OLED maker next to South Korea's Samsung, according to the China Daily report.